By Del Jones, USA TODAY
A cheer went up last week because Toyota (TM) sold more cars and trucks than General Motors (GM). The cheer obviously did not erupt from the U.S. auto industry.
Rather, it came from the industry of experts and consultants who sell the no-waste business regimen known as lean manufacturing, a regimen that is popular due almost entirely to Toyota’s success.

The publicity about Toyota becoming No. 1 will create another burst of energy to lean, even though a survey by management consulting firm Bain shows that just 19% of companies that have tried it are happy with the results, says Mark Gottfredson, Bain’s head of performance improvement. 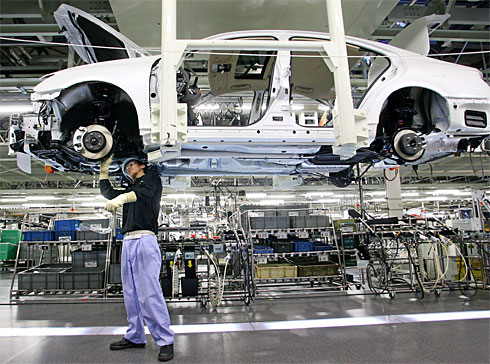 A worker at a Toyota plant in Miyata, Japan, helps assemble a Lexus. By Ken Shimizu, AFP/Getty Images

When lean succeeds, it creates efficiency by eliminating seven types of waste, ranging from raw materials to worker time. It examines every activity and asks how each contributes to customer value. It took decades for lean to catch on in manufacturing, but it’s moving more rapidly into the service sector. It turns out that identifying bottlenecks so mortgages can be processed in a day is similar to eliminating constraints to making a car in one day.

Lean’s move into the service sector has created big demand for statistical experts with a nose for waste. Those willing to jump from manufacturing companies to hospitals or banks are getting pay raises of 30% to 40%, compared with 20% raises moving from one manufacturing company to another, says Jake Stiles, president of an executive search firm that has concentrated exclusively for 15 years on finding lean-regime experts.

“There is a whole industry luring away Toyota and General Electric people,” Gottfredson says.

Jerry Mairani, chairman of American Society for Quality, estimates that there are about 2,000 ASQ members who sell training in lean or Six Sigma. About 3,000 are attending The World Conference on Quality and Improvement Congress this week in Orlando.

The ideas of lean probably date to Eli Whitney in 1800, but it has its modern roots in the Toyota Production System of the 1950s and 1960s, when Toyota was preparing the groundwork for its assault that culminated last week when it sold 2.35 million vehicles in the first three months of 2007 vs. GM’s 2.26 million, the first time Toyota won a quarterly volume title.

For example, a company can measure the percentage of customer complaints that are solved with a single phone call. Increasing that percentage not only bumps up quality and makes for happier customers but also eliminates the waste of follow-up calls.

To succeed, LSS requires a major commitment, Mairani says. It often fails because, “Authors write a book. Senior managers read them and decide to do this stuff with minimal training.”

Gottfredson says that if four in five companies remain dissatisfied, LSS may fall from favor and go down as the latest fad. But something much the same will replace it. It will just have a new moniker, Gottfredson says.

100% Healthcare Process Improvement. Our team provides what it takes to achieve top performance.

What is Lean Six Sigma?
Let us show you.